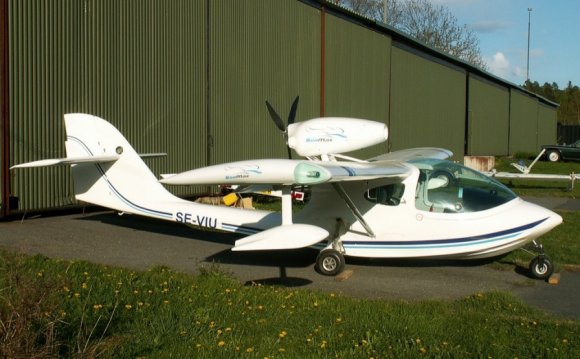 Why “dowager” you ask? A little history: Back in the 1970s, the Richter family designed and developed a number of amphibious seaplanes, the most notable of which was the Buccaneer family of models. After selling the company in 1992, the Richters — father Wayne and son Kerry— plus Paige Lynette formed a new entity, based in Orlando, Fla., they called Progressive Aerodyne for the express purpose of designing a brand new amphibian they named the SeaRey, a two-place, high-wing, pusher prop, kit-built model that enjoyed immediate popularity.

To date, more than 600 kits have been delivered all over the world, with the amphib represented by more than a dozen domestic and six foreign dealers.

Though Progressive Aerodyne still sells kits, the “dowager” part came in when the company certified the SeaRey LSX to LSA standards in 2010. Since then, President Kerry Richter estimates 65% to 70% of SeaReys sold are the LSX model. Of the more than 100 LSA models on the market, the SeaRey can claim it’s been around, in one dress or another, a lot longer than most — if not all — of them.

Almost three years ago, Progressive Aerodyne accepted an attractive offer from Tavares, Fla., a town about 35 miles northwest of Orlando that bills itself as “Seaplane City, ” and moved its entire operation to the shores of Lake Idamere, where the company has ramp access to the water for testing and customer demos.

The SeaRey LSX “Elite” resembles earlier models but with some significant improvements. Vortex generators have been added to the upper wing leading edge, which replace cuffs and make the aircraft virtually spin-resistant. The horizontal stabilizers have been canted upwards to keep the tail out of the water weeds and provide greater stability. The standard engine package has become the Rotax turbocharged 914 of 115 hp.

Gross weight has been increased to the LSA-approved 1, 430 pounds for amphibians. The leading edges of the wing are swept back with a straight trailing edge. And suspended from aluminum struts are plastic floats on either wing. The structure of the aircraft is mainly aluminum with a carbon fiber hull (fiberglass for the “Sport” model) and fabric-covered control surfaces. An engine cowling is available, mainly for looks, as it doesn’t reduce drag significantly.

This is not a business airplane, though some may use it as such for relatively short flights. It’s a fun airplane. With a cruising speed of approximately 100 mph, it will not set your hair on fire. But it has an endurance of about five hours and amazing takeoff and landing performance, land or water of about 400 feet, making some of the smallest lakes or landing strips accessible.

It has a roomy cabin, even accommodating a couple of big guys without touching elbows. Visibility is superb to the front, sides and down and the individual canopies can be independently slid back in flight. And stability is superb. Takeoffs and landings can even be made without touching the control stick. Baggage, totaling about 80 pounds, can be accommodated behind the front seats and in a small nose compartment.

It was a beautiful, sunny day with a little wind to ruffle the water as Kerry Richter and I approached the demonstrator, perched on the ramp outside the main hangar. Kerry would do most of the flying while I observed and made notes. The walkaround is fairly standard with a few exceptions.

One is to check for water in the hull, which can be rectified by use of the bilge pump. And if the airplane hasn’t been flown in a couple of weeks, it’s a good idea to pull the propeller through a few times (mags OFF please!) to get oil to the cylinders, which may have siphoned into the sump. A short stepladder is useful for inspecting the engine area (oil, coolant level, air filters, etc). And if you anticipate docking, have a paddle and a throwing rope aboard.

Climbing into the cockpit is easy. One foot on the tire, step onto the seat, other leg in and slide forward onto the floor, then strap in with the waist and shoulder harness. The brakes and throttle are mounted behind each other on the center console. The aircraft is steered by the rudder on land or water, not the brakes. Time to aviate…

Kerry pulled out the choke, mags on and hit the starter. We were in business. As we waited for the temperatures to visit the green, I asked him what the maximum sea state would be for the SeaRey.

“We’ve landed it in 3 foot seas, ” he responded, “but we recommend a foot or below unless it’s an emergency. There’s also the argument should one take off with the canopy open or closed on the premise that if there’s a problem on a water takeoff or landing, egress from an open cockpit is easier. Your choice…” We kept ours closed.

With a mag check before entering the lake, we taxied down a ramp into the water and turned into the wind, lowering 20° of flap and raising the landing gear while adjusting the elevator trim to full up. What happened next was truly astounding. With feet on the rudder pedals to steer the aircraft, Kerry applied full power without his hands on the stick. In seconds we were on the step and off the water in about 375 feet and clocking 50 mph. Flaps up in stages and we were climbing out at 900 fpm. He then took the stick to adjust the climb, leveling at 2, 000 feet.