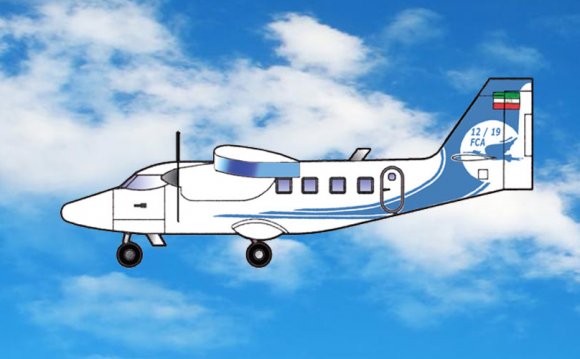 “Groppo’s designs are well known in Europe. He has been designing aircraft since the 1980s, starting with ultralight aircraft, ” Bensinger said. “The Trail was designed to fit into the European Microlight class of airplanes, which is sort of the European equivalent of Light-Sport Aircraft. Although the Trail is not very well known in the United States at this time, there are over 115 of them flying in Europe right now.”

Bensinger would know. He is a 2, 100-hour Sport Pilot, having come up through the industry as an ultralight pilot.

“I started ultralight flying in 1984. I naturally gravitated to Light Sport when it came along, ” he explained, adding that after he retired from the computer industry in Michigan he migrated to Florida where there is a better climate for year-round aviation.

The airplane has a compact appearance. The wing span measures 27 feet, 11 inches. (For comparison, the wingspan of a Cessna 152 is 33 feet, 4 inches.) The wingspan itself will likely make the airplane easy to hangar, but as an added bonus the wings can be folded for ease of storage.

“And you don’t have to drain the fuel to fold the wings, ” Bensinger said, then proceeded to demonstrate the process, which took less than five minutes. “There are two lock pins on the spar and there is a single lift strut that they rotate around. It is a one-person job. And once the wings are folded, the widest part of the airplane is the tail, which measures about 8 feet across.”

Bensinger said it is not uncommon for owners to fold just one wing to store the airplane up against the wall of a hangar.

The Trail also can be loaded on a trailer and towed with both wings folded against the fuselage after the owner has installed a few braces on the airplane for transport.

“People really like that it is an all-aluminum airplane, ” said Bensinger. “The only cloth on the airplane is on the seats.”

The airplane has tundra tires and one piece 2024 aluminium landing gear designed for STOL operations.

The choice of engine is up to the purchaser, said Bensinger, as motor mounts and cowlings are available for the amateur builder who wishes to use either the Rotax 80- or 100-hp engines, the Jabiru 220 or the European Sauer engine, which is a Volkswagon derivative. The Trail on display at SUN ‘n FUN was equipped with a 100-hp Rotax 912 S.

“It really depends on what the purchaser wants, ” said Bensinger. “But if the purchaser wishes to fly the airplane in the Light Sport category, the engine is limited to the Rotax 912S right now.”

Bensinger himself is in the process of building a Trail. He had the frame on display next to the finished airplane at SUN ‘n FUN.

“The factory tells me that it will require about 500 hours, ” he said.

The kits are shipped in a large wooden container. Step-by-step assembly drawings and digital pictures of the assembly process are included.

“The front fuselage area is all pre-welded and powder-coated when you receive it, ” he noted. “There are no special skills required to build it, you just need basic sheet metal skills, so you need to know how to pull rivets and trim metal.”

Don’t want to build it yourself? “The distributor can assist with the build process and the aircraft can be certified as an E-LSA, ” he noted.

“One is strictly analog with a radio and transponder, ” said Bensinger. “Eventually we will be adding ADS-B when we are required to have it. The second panel is all electronic and uses MGL Avionics. We have that one spec’d out so there is a small AHARS on the left side of the panel for flight instruments and an engine monitor on the right. There is an iPad mini in the center for navigation. Add to that a radio, transponder and the ADS-B and you have one cool panel.”

Options for the Trail include leather seats, rock traps for the tundra tires, and a ballistic parachute.

Performance of the Trail LSA