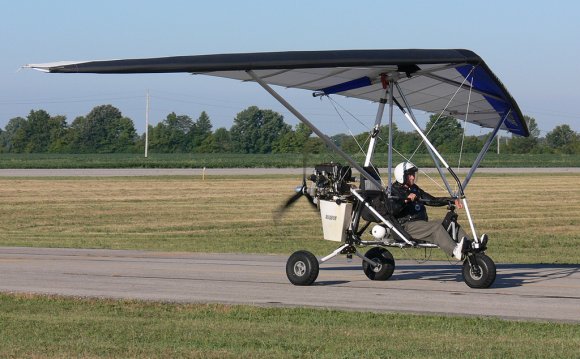 Air Trikes Enterprises is a Canadian business working in the field of Experimental, Ultralight, Light Sport aviation in North America from 2002 year. Our main spheres:

Let me introduce myself. My name is Vassili Tarakanov, Air Trikes Enterprises manager and owner.
I am an Aircraft Design Engineer, specializing in aerodynamics and flight dymamics. I am also a Transport Canada certified ultralight instructor.

My wife and I, we moved to Montreal, Canada in November 1999.

I graduated from the best Russian aviation university - the Moscow Aviation Institute (MAI) in 1986.

After my graduation I worked as a research engineer in the aerodynamics department of the famous Sukhoy Aviation Design Bureau for about 4 years. My work involved high technology military aircraft. It was a very good job for me as a young engineer, for improving my knowledge and skills.

My hobby however is ultralight and homebuilt planes and remote control helicopter models. Since my childhood I have been making flying models. I was the champion of Moscow in aircraft modeling, Master of Sports.

I began ultralight flying in 1982 when I was a student at MAI. I did my first solo sailing flight and a little later I designed my first hang glider at the delta club of MAI. When I began working at the Sukhoy Aviation Design Bureau, I was already experienced delta pilot-instructor and designer. In 1987 my friends and I created an amateur delta club there. After workdays we made a few training deltas of my design. I organized the commercial production of these designs later as well. I taught new pilots to fly them. We had a lot of flights and camping on weekends and holidays. It was a very exciting time for me.

Unfortunately, 1989-90 was the year when economic crisis began in Russia with reduction of work for military aviation personnel. That is why in 1991 I left the Sukhoy bureau and began working at a small general aviation design bureau as a research and design engineer of light sport airplanes, hang gliders, remote control business aircraft, and ultralight flight machines. There was one more reason. I wanted to travel, perhaps to immigrate, but it was impossible because of my work for secret military airplane projects. However, after five years of quitting Sukhoy Aviation I was finally successful in getting my foreign passport.

Now, some words about magnificent ultralight flying machines called trikes. The popular rendition of a trike was born in the UK and France in the late '70's, and soon it became the most popular kind of ultralight in Europe. This was made possible because the trike was relatively simple, low priced, had excellent service and flying performance, is the safest (by world ultralight accident statistics) and the simplest to control ultralight. Now, trike flying is becoming popular in the US and Canada as well for the same reasons.

The trike looks a lot like a hang glider with a tricycle like undercarriage. There is an engine and a pushing propeller behind it. A triangle shaped bar (control frame) is directly attached to the wing. From this, the pilot controls roll and pitch which in turn steer the trike in the air. I know of one, two and even three-seat trikes.

As an Aerospace Engineer I can tell that the trike has more suitable layout for an ultralight then a conventional airplane. It does not have a tail boom with stabilizers with their aerodynamic drag. There is no interference between the wing and the body or body with prop downstream. There is no negative lift on horizontal stabilizer. This fact allows making take-off and landing with lower airspeed, which is safer. The trike wing is not capable of stall spin. NASA and CAHI research proved the advantages of this concept. Trike does not require a hangar and can be stored in your garage alongside your car taking almost no space. You can transport it on a trailer like a motorcycle or a snowmobile. 30 to 50 minutes of assembly and you are ready to be airborne.