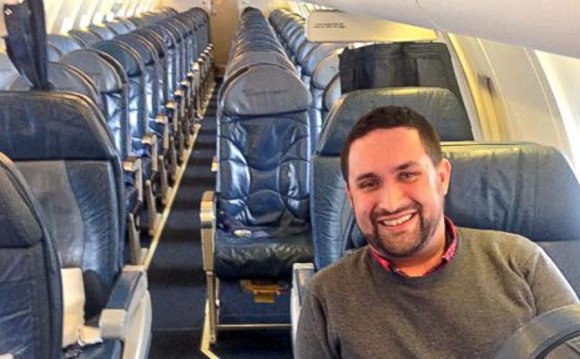 An explosion blasted a hole into the fuselage of a commercial airplane as it flew over Africa on Tuesday, forcing an emergency landing in Somalia.

"It was my first bomb, " Vodopivec said. "I hope it will be the last."

A hole was ripped open on the side of this Somali Daalo Airlines jet shortly after takeoff. The plane was carrying 74 passengers, the airline said. (Awale Kullane)

Daallo Airlines wrote on its Facebook page that a plane operated by Hermes Airlines was headed for Djibouti when there was "an incident shortly after take-off." The aircraft was carrying 74 passengers, according to the airline.

"The Aircraft landed safely and all of our passengers were evacuated safely, " it said. "A thorough investigation is being conducted by Somalia Civil Aviation Authority."

The incident occurred when the plane was "at about 11, 000 feet, " Vodopivec said.

"It would have been much worse if we were higher, " he said.

Cellphone video taken aboard the plane pans from passengers, some wearing oxygen masks, in seats toward the back of the airliner in flight, and then swivels to the empty front area with a hole in the side of the cabin. There is a loud sound of rushing air. The video was taken by Awale Kullane, Somalia's deputy ambassador to the United Nations, and obtained by The Associated Press.

"When we heard a loud bang, the co-pilot went back to the cabin to inspect the damage and I took over the commands as the procedure demands, " Vodopivec told the AP.

He added: "Smoke came into the cockpit, but it was mostly concentrated in the back of the aircraft. The stewardesses did a great job calming down the passengers and following the emergency procedure."

According to the AP, Kullane, the ambassador to the United Nations, said on Facebook that he "heard a loud noise and couldn't see anything but smoke for a few seconds." Then, he saw that "a chunk" of the fuselage was missing.

"I was terrified and most people were terrified, " he said. "Of course we give credit to the pilot who landed that plane."