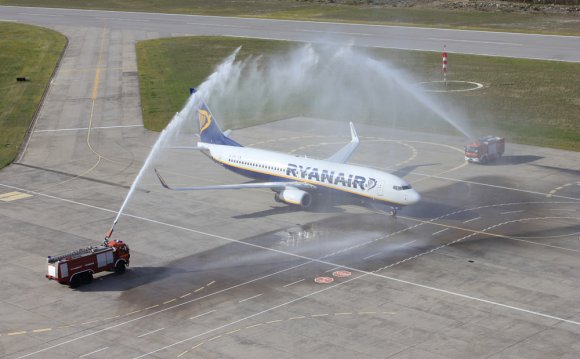 Questions over options for drinking water on airplanes have been burbling around the blog since US Airways began charging passengers for water on Aug. 1.

Last week, we wondered whether it was ethical for airlines to charge for water. Commenters debated among themselves over whether passengers seeking free water should head to the taps — either from the bathroom (Ick. — ed.) or the galley.

“Anybody that is thirsty can get FREE TAP (airplane potable water) WATER if they feel thirsty, ” wrote one commenter under the name “Bill.”

“Bill is wrong, ” fired back another using the nom-de-blog “Thirsty.” “The tap water on airplanes is not reliably safe to drink. Tanks are only cleaned a few times a month so it contains bacteria from wherever the plane has been and tanked up–possibly including various countries and US regions where tap water is not potable.”

So which is it?

We did a bit of digging, and well, let’s just say we’re going to keep buying bottles of water in the terminal. Back in 2002, The Wall Street Journal produced a muckraking piece in which reporters packed sample vials and hopped on 14 different flights, collecting water from galley and lavatory taps.

The results of our water-quality snapshot: a long list of microscopic life you don’t want to drink, from Salmonella and Staphylococcus to tiny insect eggs. Worse, contamination was the rule, not the exception: Almost all of the bacteria levels were tens, sometimes hundreds, of times above U.S. government limits. “This water is not potable by any means, ” says Donald Hendrickson, the director of Hoosier Microbiology Laboratories in Muncie, Ind., which tested our samples.

Then in 2004, the U.S. Environmental Protection Agency — which monitors tap water quality on the ground and in the skies — conducted a study of airplane drinking water, finding water supplies on 15% of the 327 aircraft it tested positive for “total coliform.” (Total coliform are indicators that other disease-causing organisms such as fecal coliform or E. coli. could be in the water and could affect people’s health.)

Officials at the Air Transport Association, an industry trade group, say the water on airplanes is perfectly safe to drink, telling the Terminal that they have concerns with the methodology of the EPA’s tests back in 2004. Among the ATA’s concerns: The majority of the tests seemed to come from airplane lavs rather than galleys. (Airlines also criticized the Journal’s methods for testing plane water in 2002, raising the issue of cross-contamination.)

Ladies and gentlemen... This is AIRPLANES WATER SPOTTING!!!