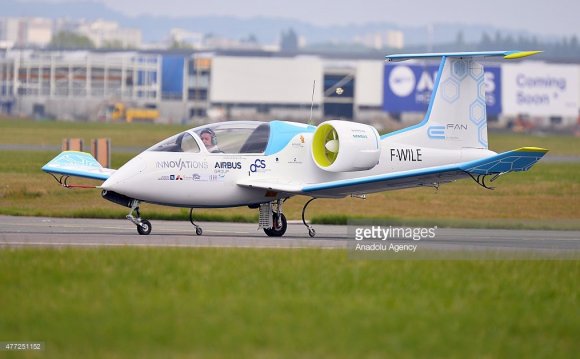 LAST week, an electric-powered light aircraft took to the skies over the vineyards of Bordeaux, France. It was only a small, two-seater plane but the technologies that made the flight possible could lead to a new class of hybrid airliners. One day, the plane you board to go on holiday might be flying using cleaner, greener electric power.

Called the E-Fan, the quiet, sleek carbon-fibre plane is the work of Airbus, the French plane-maker. With two 65-kilogram lithium battery packs hidden in its wings, each driving a 30-kilowatt electric motor, the E-Fan cruises at 185 kilometres per hour and flies for an hour. While it’s not going to win any speed or endurance prizes, it’s the first step in a development programme that could lead to much bigger electric planes – with next generation, high-power lithium-air batteries and superconducting motors.

While Airbus’s rival Boeing built and flew an electric fuel-cell-powered light aircraft in 2007, Airbus says its E-Fan is more than just a research project. From 2017, a new division of Airbus called VoltAir will make and market the E-Fan, says Jean Botti, CTO of the Airbus Group, selling them as training planes for pilots and tow planes for gliders in a market dominated by Cessna. Later hybrid versions of the E-Fan – in two and four-seat versions – will use a small engine to charge the batteries in flight so that it can stay aloft for three-and-a-half hours.

But a hybrid passenger jet is the ultimate prize. “The E-Fan is just a precursor to a bigger, regional airliner, ” says Botti. In a research programme called E-Thrust, Airbus is aiming to produce a hybrid airliner with 80 seats that can handle regional city hops – a Toyota Prius of the skies, if you like.

“Airbus is aiming to make a hybrid airliner with 80 seats – a Toyota Prius of the skies, if you like”

Boeing, too, is researching hybrid electric aircraft designs alongside NASA – looking into planes that could seat as many as 150 people – although its plans are a little further off. “The results of the experimental programme are being held for further analysis, ” said a spokesman when asked about the firm’s 2007 light aircraft test. Instead, Boeing is focusing on testing other emissions-reducing ideas on its 787 jet.

Airbus is pressing on. It plans to use a Rolls-Royce jet engine in the E-Thrust – not to generate thrust but electricity. This would continuously charge batteries that power a bank of six propellers. But the challenges of moving from a two-seater to an 80-seater are profound, says Botti&colon; while the E-Fan has two motors providing 60 kilowatts, the E-Thrust would need a total of 4 megawatts – or around 670 kilowatts from each of its six electric motors.

That will involve extremely high currents, so a new generation of electrical cabling, connectors and electronics will be needed, says Botti. At Airbus’s lab in Munich, Germany, motor experts from Siemens are helping Airbus develop ways to harness superconductors for the cabling and motor windings. Siemens is hoping to apply some of the tricks to hyper-efficient wind turbines. “There are similarities, ” Botti says. “But unlike wind farms we have to safely defy gravity.”

Delia Dimitriu, who studies the environmental impact of aviation at Manchester Metropolitan University in the UK, says that as long as Airbus uses renewable sources to charge batteries when the planes are on the ground the technology is a “positive step forward” to preventing aviation’s emissions doubling against 2000 levels by 2050.