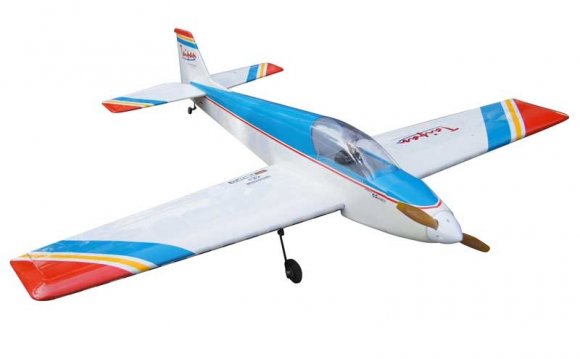 There are many different rc aircraft types associated with radio control flying, many of which you'll see at an rc flying club field. If you're completely new to the hobby and are wondering what these types of rc aircraft are, then this page will introduce you to them.

Remember that the word aircraft covers all flying machines, not just conventional airplanes. Also bear in mind that the most common rc aircraft types (airplanes and helicopters) can be scale, semi-scale and non-scale models. These three terms refer to the reality of the model; whether it replicates a real aircraft (scale), is a close representation of a real aircraft (semi-scale) or is a completely made-up design (non-scale).

Whether you end up flying scale, semi-scale or non-scale rc aircraft comes down to your own personal preference. There are plenty from each category to choose from these days, a reflection of the popularity of the hobby!

For the purpose of this page, rc airplanes and helicopters have been split into their own types; simply categorising the two as aircraft types would be a bit broad given the variations available.

Collectively, rc planes account for the largest number of aircraft in the hobby. Having said that, the popularity of flying rc helicopters has grown tremendously in recent years as have surged onto the scene, and the gap between the number of rc airplane pilots and rc helicopter pilots has become much smaller than it ever has been.

Note that this page doesn't intend to 'officially categorise' rc aircraft - the following list is just to introduce you to your options...

Trainer airplanes, or 'trainers', are designed for learning on. They are conventional in design and basic, with the wing on top of the fuselage for maximum stability in the air. Trainers can be powered by electric motor or internal combustion engine, glow plug (nitro) being the most common of the IC group.

Trainers are available in many different sizes and shapes and count for a large sector of all rc aircraft. Ideally your first rc plane will be a trainer.
Read more on .

Sport airplanes also make up a very large sector of all rc planes. They are a step or two up from a basic trainer but can also be used for training purposes, particularly low-wing training. Sport airplanes, like trainers, can be any size or shape and are more capable of performing aerobatic maneuvers than trainers are; the majority of sport planes are mid or low wing, making them better for performing such maneuvers.

High wing planes like trainers, generally speaking, are not that aerobatic.

Aerobatic airplanes have been designed specifically for performing advanced aerobatic maneuvers and '3D' flying. This type of rc airplane is typically mid wing with oversize control surfaces and motors (electric or nitro) that are more powerful than the airplane actually needs. Aerobatic airplanes can be thrown around the sky and flown very aggressively, so long as the pilot knows what he or she is doing!
Read more on

Warbirds have always been a popular rc aircraft subject; their classic lines and smooth flying characteristics make warbirds some of the nicest looking rc airplanes out there. Not particularly suitable as an absolute first model, although there are some RTF warbirds available that have been developed with the beginner in mind. The term warbird describes a plane that was used in war, notably the First and Second World Wars. The P-51 Mustang, Spitfire and Corsair F4U are classic examples.