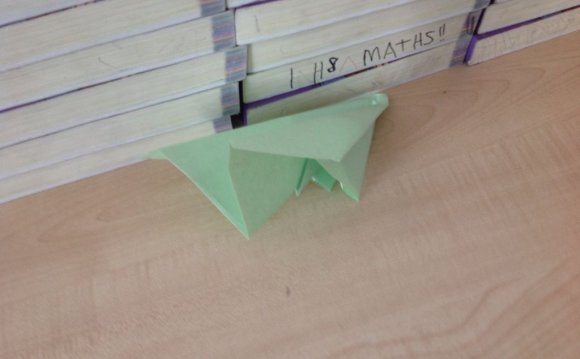 Fold a piece of paper in half lengthwise. The best type of paper to use is an ordinary 8 ½ in (21.5 cm) by 11 in (28 cm) printer or A4 paper. Perform a book fold to begin. Make a book fold by folding your paper in half the long way. Fold the top two corners down. Take the top corners of your paper and fold each one into meet at the center crease. You will have two triangular flaps on top of the rectangular portion of your paper. Fold the top corners to the center crease. Repeat the same type of fold you just made. Fold in the outer points at the base of each triangle. Fold toward the crease. Fold the paper in half in a mountain fold. Take your plane and fold it back in a mountain fold. Fold the wings down. Position the plane so the straight portion is on the bottom. Fold the wings down to line up with the base of your plane. Fold the wings down again. The base of your plane should be flat and at the top you should have a flat edge starting about halfway back.

Fold the paper down to align your edges. Fan out the wings. Now pull the top layer of folds up to fan out the wings. You will have two larger, flat wings on the top with a few smaller wings below. Throw your paper airplane. Test your plane by flicking your wrist.