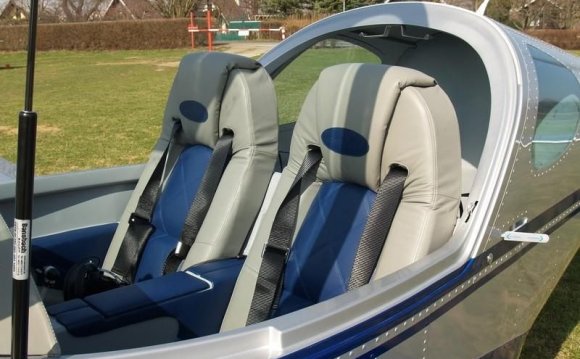 Bristell may look somewhat familiar, but this is a fifth-generation design. As the Light-Sport Aircraft category was created by FAA in 2004, the evolution of Bristell over such a brief period has been quite exceptional. When many pilots get their first glance at this shapely aircraft, they often experience a sense of deja vu. No surprise, really, as Czech design guru Milan Bristela was also a key engineer in the SportCruiser (for a time known as the PiperSport). However Milan knew many ways he could improve the design. After opening his own company he continued through iterations of the all-metal low wing aircraft until arriving at the smooth and sleek version pictured nearby and elsewhere around ByDanJohnson.com.

When various journalists flew Bristell, even after previously sampling the PiperSport, they realized Bristell was different, smoother, larger. Even long experienced aircraft reviewers came away deeply impressed and with great big smiles on their face ... every one of them.

Bristell boasts a finely finished interior, in fact, it has a widest-in-class 51.2-inch cockpit that offers a superb view through its optically-superior canopy. A well appointed instrument panel includes the brilliant new Garmin G3X touch screen with Garmin 796 GPS-MAP. Bristell proves itself thoroughly modern offering optional Apple iPad integration. Empty weight is a slim 729 pounds that provides a payload of 400 pounds even with full fuel at 32 gallons, easily enough for two large Americans. On its ample fuel supply, range is a distant 700 nautical miles based on more than six hours endurance. The 100-hp Rotax burns only 5 gallons per hour even at high cruise speeds. Baggage capacity is significant as Bristell can carry 121 pounds in two wing lockers plus in space aft of the seat (depending on other loading, of course).

In flight, Bristell was a thing of beauty with wonderful handling and an unimpeachable stability profile. Stall is a very modest 32 knots or 39 clean and "max structural cruise" is listed at 116 knots or 133 mph. Never exceed speed is 145 knots. Bristell gets its fleet ways thanks to that careful, experienced design where the fuselage and wings are smoothly contoured and junctions flow smoothly between wings and fuselage.

All these design and construction actions result in a Light-Sport Aircraft that is a comfortable, capable, cross-country aircraft that can also handle the day-to-day abuse of a flight training. If you are an experienced recreational pilot or the operator of a flight school, Bristell should go high on your list of aircraft to examine closely. The company has new U.S. representation (in 2014) and deserves a close look.

to favorites list SPLOG BRM Aeros Bristell Gains New U.S. Distributor,
SPLOG begins: BRM Aero 's Bristell got off to a good start in the USA two years ago. Unfortunately, after an initial burst of positive reviews and good response from pilots, the distributor at the time stumbled. A failed association with the now-defunct Aviation Access SPLOG LSA Taildraggers Broaden the Sectors Appeal,
SPLOG begins: Taildraggers may be among the least understood and most feared aircraft available in the LSA space ... or for that matter throughout general aviation. While we have many good choices that I'll list below, I have nonetheless heard from many readers or

SPLOG Summer's Coming; Cool It, Fellow Pilots!,
SPLOG begins: Across the northern U.S. states and across much of Europe it was a lousy, cold, snowy winter. It seemed everyone I spoke to at Aero in Friedrichshafen, Germany complained about the crappy winter and their laments mirrored those from America's northlands. SPLOG Aero Friedrichshafen Video Bonanza,
SPLOG begins: We were busy at Aero Friedrichshafen 2013, knocking out more than 30 videos for your viewing information and entertainment. That's more than seven videos per day and a sum of more than five hours total running time (more than three Hollywood movies in SPLOG Pre-Sebring 2013 LSA News Wrap,
SPLOG begins: Patty Wagstaff and LSA? This week brings the start of the Sebring U.S. Sport Aviation Expo and excitement is high. Following are some news items to those who follow this event and the light, recreational aircraft space. On Friday, January 18th, Sebring

SPLOG First Half 2012 LSA Registration Update,
SPLOG begins: We've been getting requests for market share information and I am happy to provide an update, thanks to my European associate Jan Fridrich who does the hard work of sifting through FAA's database. I remind you that his efforts are not merely tallying SPLOG Flying the Airplanes of Sebring 2012 Bristell,
SPLOG begins: Since Sebring in January, the airshow season has rushed by at warp speed and now we return to more aircraft flown at the event that kicks off the aviation year. We'll add more from Sun 'n Fun soon plus we're loading more than 30 new videos. In this post, SPLOG Lockwood Rotax and Bristell at AOPA Summit 2011,
SPLOG begins: At AOPA summit I spent time in the Lockwood Aviation booth giving me a chance to speak with a few RV-12 builders. *** Van's has reportedly sold approximately 600 RV-12 Light-Sport Aircraft, of which 150 may be flying, making RV-12 by far the most successful SPLOG A Pair of New SLSA Arrive Before AOPA Summit 2011,
SPLOG begins: Just in time for this year's AOPA Summit, welcome to a pair of Special Light-Sport Aircraft, numbers 121 and 122 : the first, the formerly named NG 5 LSA, rebadged as the Bristell Fastback by importer Liberty Sport Aviation of Pennsylvania; and the second SPLOG Two New (Yet Familiar) LSA Return to America,
SPLOG begins: Here's a tale of two planes. One has been seen and sold in the U.S. (Lambada motorglider). The other has a fascinating history and should look familiar to you... quite familiar. It's now known as the NG 5 LSA and that probably rings no bell. However,