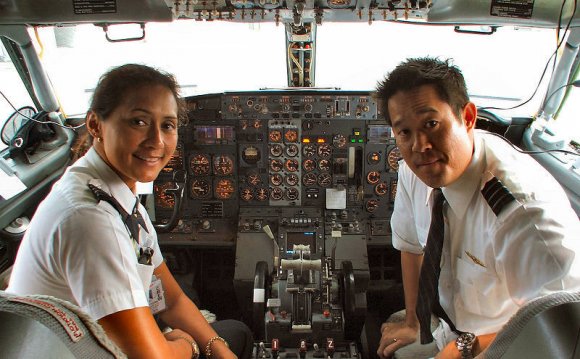 My friend Mike* is a First Officer at a regional airline here in the U.S. He's graciously agreed to answer some questions exclusively for Flight Club about being a pilot, as well as addressing some of the rumors that we hear as travelers about everything from sex to slowing your plane down on purpose.

Is it true that regional pilots intentionally fly slower to make more money, since you're paid hourly?

Yes and no. We fly slower than we could be, but the little bit of extra money it makes us is an unintended consequence.

Over the last few years the speed at which we fly in cruise has been dialed way back in the interest of saving fuel. When fuel was cheap, nobody thought much of getting into cruise, setting the thrust levers at max, and getting where you're going as quick as possible. As fuel costs started to increase, airlines started turning over every rock in search of fuel savings. Basic aerodynamics teaches us that the faster you go, the higher the amount of drag exists on the airframe. In fact, doubling the speed at which you're flying actually will quadruple the amount of drag felt by the airplane. Long story short, flight planners realized that by going fast everywhere everyone was burning a ton more fuel only to arrive there a couple of minutes early. Especially on the shorter stage lengths that regional airlines tend to fly, you're really not increasing your flight time by more than a couple minutes, yet you can save hundreds of pounds of fuel.

If we're on time or early, I like to fly at the speed that saves us the most amount of fuel. It is also a lot more advantageous to fly your planned speed so that the fuel burn that was calculated for our flight plan is accurate.

On top of cost savings, arriving to your destination with more fuel gives you more options if you can't get straight into the airport. The fuel saved by flying more economically can mean the difference of one more turn in a hold vs. having to head to an alternate airport.

There are times when it makes sense to go fast though. Most of us fly frequently as passengers, we understand the need to arrive to your destination on time. On top of that, regional airlines are compensated for each flight they operate for their mainline partner, plus bonuses for completion factor and on time performance. If we are running a few minutes behind schedule, it makes sense to go fast to try to get back on time. Even just a few minutes can make the difference between someone making their connection vs having to spend the night in the airport.

I have flown with a few people who do fly slow everywhere they go because they think they're padding their paychecks. But they tend to be the extreme minority...and to be honest, you can add more to the flight time by taxiing slow or taking the second turnoff on the runway instead of the first.

Do main-line pilots treat you with equal respect as peers (since they likely started as a regional pilot too) or do they look down on you?

One of the best thing about this industry is the camaraderie. One of the absolute best perks of the job is that almost any airline pilot in the country can go to the airport and ride for free/cheap on the jumpseat of almost any other US airline. This certainly increases your exposure to pilots who work at other airlines. This is a very unique industry that nobody will understand unless they've been there. One of my coworkers likened it to the life of a carnie. We're in a different city every night and we give people rides.

As a result, most of us look out for each other, even if they work for a competing company. Unfortunately aviation is not immune from the general guideline that 10% of the people on this planet are idiots. One day after giving a 737 pilot a ride home to HSV [Huntsville, Alabama], he stopped me on the jetway and told me that he hoped I would become unemployed by next year. Some people are just unhappy in life and feel the need to take it out on others. But all in all, we get along. Look at two pilots as they pass one another in the terminal. Usually we'll exchange a nod. Its not a greeting, so much as it is a shared understanding of how crazy this job can be sometimes...basically a "yeah.me too."

Do pilots hook up with flight attendants as often as people think?

I can honestly say that if this has happened on any crew I have been a part of, it has been very well disguised. I can't think of a single time in which I've noticed anyone in my crew head back to a hotel room together. There are some couples that are dating and bid to fly together, but I've never seen a random hookup.