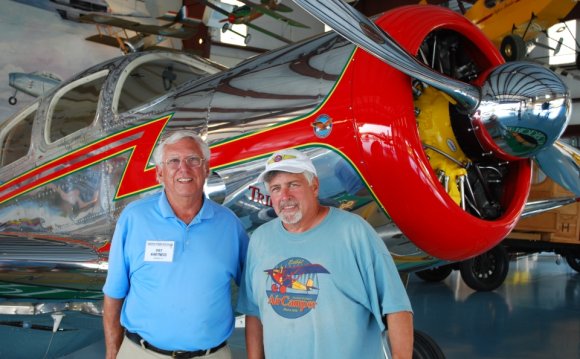 EAA Chapter 44 is undertaking a capital campaign to raise funds to build a Sport Aviation Center (SAC) that will benefit the Rochester Community and our members. We are asking for your support by making a .

Contact Treasurer: Gail Isaac (585) 352-1205 or email her at gisaac @ rochester.rr.com (delete spaces on either side of @ symbol) for details on how you can help EAA Chapter 44 by making a donation of your skills, materials or money. Or make an on-line donation via PayPal at the bottom of this page.

This facility will be a place where people can learn how to build or maintain their own airplane, where kids ages 8 -17 can take a free flight, help support our Young Eagle Adventure program in local schools, meet new and interesting people, perhaps take a Sport Pilot ground school, learn about General and Sport Aviation, learn about the, learn about Rochester's rich aviation history, hear presentations by aviation dignitaries and much more.

The SAC will be comprised of the following: A library of aviation books, magazines, photos and tapes; a museum of local aviation history, a large general purpose room suitable for use as a classroom for workshops, lectures, presentations, and meetings; a Link trainer we are restoring; a hangar for members to complete final assembly of their homebuilt or restored aircraft; taxi/runway access and much more.

During the summer and fall of 2009, the outer shell was erected and the building was secured. This included the installation of the windows & doors, ceiling, heavily insulated walls and ceiling, installing the drainage and water supply pipes under the floor area and the pouring of the cement floor slab.

During 2010, the framing of the interior walls was accomplished as well as roughing in the interior electric wiring. Several ditches were dug and pipe laid for water, septic and electrical lines., a Rochester based plumbing and sheet metal fabricator donated the design, construction and installation of the SAC ductwork and plenums as well as the installation of two furnaces that were donated to us. Words cannot adequately describe what this donation meant to us.

In early 2011, we received our provisional Certificate of Occupancy after our work crews got the building's two furnaces running, tied the building into the County water system and made our bathrooms functional. Endless sheets of drywall were put up and a quick coat of white primer was applied.

We held our first official EAA Chapter 44 meeting at the SAC on Tuesday, April 19th, 2011.

On June 21st, 2011, we had a double header at the SAC. The SAC was formally dedicated with a mid-afternoon ribbon cutting ceremony attended by our members and local dignitaries. A couple hours later EAA (Oshkosh) CEO and President Rod Hightower flew in from Oshkosh, WI as part of his Grassroots Pilot Tour to attend a cookout and speak about the state of aviation and what EAA is doing to grow participation in aviation and inspire the next generation of aviators. He named EAA 44 as an excellent example of an EAA Chapter that is helping with that mission. The meeting was attended by over 125 EAA 44 members and fellow aviators.

This event was followed a few days later with our hosting a Grand Opening of the SAC on Saturday, June 25th to show the SAC off to the community.

During the summer of 2011, , a Rochester based company, stepped forward in a huge way to help us make our building ready for the computer age so we can support our many aviation oriented projects. They helped us by developing a computer system design plan for the SAC and then provided many of the materials needed to make it happen. Kriterium provides network design, installation, administration, hardware and software sales, premise wiring, VOIP telephony, and Managed Security Services all over the country.

During the fall of 2011, our work crews poured a cement floor for the SAC's porch which faces onto the runway. We hope to add a sidewalk that will wrap around the east side of the building in 2013.

In March of 2012, the SAC received its Certificate of Occupancy after our work crews spent the winter framing doorways and windows, hanging doors, installing additional plumbing, painting the walls and more.
2013 was another busy year. Three Boy Scouts chose projects at the SAC as their Eagle Scout projects. They included (1) landscaping the east and south sides of the SAC, (2) completing our Pilot's...