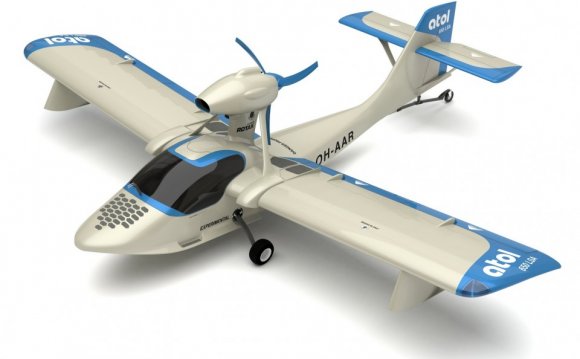 Rovaniemi, Finland is the official home of Santa Claus, but something besides Santa’s sleigh is taking flight here. In this land of the midnight sun near the Arctic Circle, Atol Avion Ltd. created the ATOL 650 Light Sport Aircraft (LSA). Imagine flying independently without needing airports. That’s the vision of Atol Avion’s aircraft designers.

A two-seat, single-engine, wood-composite aircraft, the ATOL 650 is an amphibious seaplane that takes off and lands in three elements—water, land, and snow.

The ATOL 650 just completed its maiden flight. “The first flight went exactly as expected, ” says test pilot, CEO, and head designer Markku Koivurova. “In half an hour, the flight carried out a number of different tests, which for example ensured the plane’s behavior in multiple unexpected circumstances, such as when the plane is stalling. The flight characteristics of the ATOL were exactly as expected and the plane is very easy to fly.”

Watch the plane take off from water and land, and see its unique folding wings and compact design:

Getting to the maiden flight wasn’t easy for Koivurova. The ATOL 650 had its start with his designs developed in the 1980’s. In 1989, a storm destroyed a successful prototype, and a second prototype arose from salvaged parts and insurance money. The 1990’s brought an economic downturn to Finland, causing further challenges, until Atol Avion Ltd. was established in 2011 in an effort to renew the project.

In pursuing the vision of flying freely, Atol Avion wanted to build on the original design to create an aircraft with extreme beauty, strength, safety, and flying behavior. They chose PTC Creo and PTC Creo Simulate to help meet these goals.

“In cooperation with our experienced PTC Creo designers, we have been able to create the best amphibious aircraft ever, ” says Koivurova. “For our extensive needs, PTC Creo features the best design and simulation tools in the market for parametric-driven 3D models.”

Over the past several years, Atol Avion worked through and tested design enhancements. The results include reducing aircraft weight by 10% and optimizing aerodynamic shape. Designers refined the engine cowling and fuselage extension. They also redesigned the nose, canopy, and upper fuselage for aerodynamics and to reduce twirling in the tail.

Along the way, Atol Avion tested their designs with PTC Creo Simulate. It offers a full range of computer-aided engineering (CAE) analyses, including linear static, modal, buckling, contact, and steady state thermal. To drive the design cycle, it provides detailed data for insight into how designs will perform in the real world. And PTC Creo’s extensive surface modeling features help companies like Atol Avion address the complex shapes involved in aircraft design.

If you want to fly anywhere, you need to take your airplane anywhere. To make the ATOL 650 LSA easy to store and transport, Atol Avion also gave the aircraft a unique folding-wing design. In fact, you can store the plane in the compact ATOL Mobile Hanger, which becomes a trailer for transport. It even includes climate control for proper temperature and humidity.

Simulating and analyzing your model is just as important as creating it. The easy-to-use, powerful design and simulation environment of PTC Creo lets you study the performance of 3D virtual prototypes. Seamless integration with modeling and design means you can change a part and quickly retest in the 3D environment.