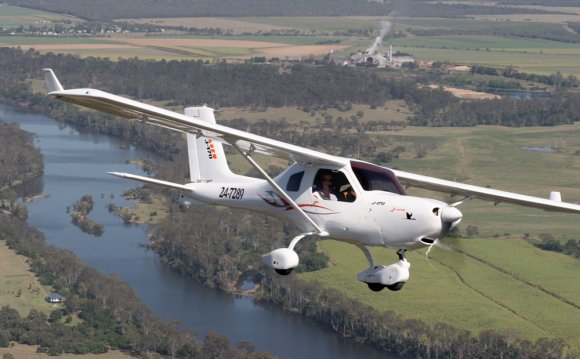 Bristell's at Ausfly, Narromine 2016 Ausfly 2015 at Narromine has come and gone once again and after some horrific weather on the Thursday, which delayed many trying to get in, the show enjoyed perfect weather for the remainder of the weekend. The Sporting Aircraft Association of Australia (SAAA) put on another good show with aircraft of all shapes and sizes on display.

In 2013 after selling his Tiger Moth, Mark McLachlan from Moruya took possession of his Bristell. John flew with Mark up to Northern Victoria to enable Mark to get his aircraft back to NSW

Delivering the first Bristell for 2015

In January, upon the arrival of the first two Bristells for 2015, Pav from WA flew over to Melbourne to see first hand how the Bristells would be assembled.

The first of the next seven Bristells arrive

This years Natfly was held under sunny skys with perfect weather with everyone expecting a good turnout and a great event.

Bristell's at Narromine
After some “iffy” weather leading up to the event, the show enjoyed a couple of lovely if not windy days, and the Sporting Aircraft Association of Australia (SAAA) guys put on a good show with lots of aircraft of all shapes and sizes on display and strutting their stuff in the air. Warbirds, replicas, Chinese, Soviet, homebuilt, sporty, utilitarian, high tech, low tech and everything in between, Narromine had it covered with great access to the aircraft so you could getup close and personal.

On Saturday the 8th of March Woman with Wings was offering discovery flights for woman of all ages at Bathurst airfield in NSW.

On the 23rd of February Western Port Aviation Services run by Artie and Andrew Ralston opened their hanger to locals at Tyabb and the local flying club.

2 days after a busy, busy NatFly, I flew out to visit Milan at the BRM Aero Bristell factory to see some of the new manufacturing processes first hand and discuss with Milan some of the exciting new ideas and plans for future Bristell models.

Easter's NatFly 2012 in Temora was an exciting time for Anderson Aviation. It gave us the opportunity to showcase the new range of Bristell's from BRM Aero as well as introduce the exciting RG with retractable landing gear.


We bring to you snippets from the aviation world as seen through our Bristell coloured glasses. We welcome your input with some of your own stories, photos and articles that are suited to our community's passion for light aircraft and flying in general

The Norwegian airlines pilot is pushing the limits on this ...