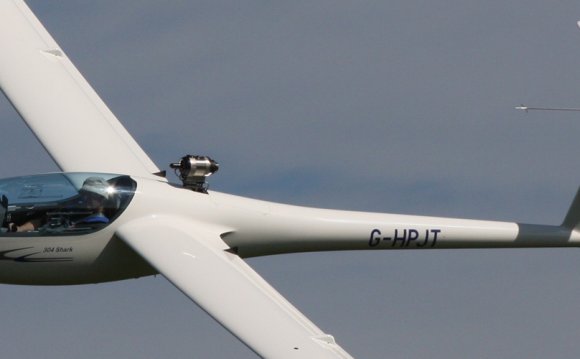 More and more customers have been drawing our attention to projects aimed at equipping gliders with turbines, saying things like "Wouldn't that be an excellent turbo engine: light-weight, without vibrations, hassle-free?"

We are, of course, keeping a close eye on these developments. In most cases, the turbines involved have been taken from model aircraft, two turbines being combined in order to generate the necessary power. An ultralight glider (Silent) even succeeded in launching itself that way. And in Sweden, there is a Blanik equipped like that - see picture!

The problem with these turbines is not their hot propulsive jet, which actually doesn't torch the rudder. The problems are noise and fuel consumption.

On the subject of fuel economy, it is often pointed out that these propulsion units are so light that you can easily fit a larger tank. That may well be true, but it will become quite expensive in the long run. Jet engines work best at the high speeds of commercial airliners. In gliders, their efficiency is rather poor, and the fuel consumption is many times that of comparable combustion engines.

The noise is indeed considerable, and we are asking ourselves whether we really want that. "Silent gliders" howling like that? What do you think?

The noise and the burden on the environment are almost certainly also the reason why it is currently not possible to obtain approval for this type of propulsion. Two years ago, someone from the German Civil Aviation Authority (LBA) told me with a wink:

"There are comprehensive certification procedures. All you have to do is satisfy these, and you'll be okay. Just make sure you meet the same requirements as a 777!"

At that time, nobody at the LBA was prepared to stick their neck out for this type of propulsion.

Recently, Helmut Fendt, the head of the relevant department, sent the following reply to an enquiry on this subject:

We acknowledge receipt of your enquiry. We hope you will understand that we are unable to give you a detailed reaction to postings from the Forum. We can, however, provide you with some information on the state of our current activities in the area you mentioned.

Various efforts are currently being undertaken to develop a motor glider with jet propulsion. At this stage, these activities are spread over several (European) countries. Since 28/9/2003, type approval certification in Europe lies with the European Aviation Safety Agency, EASA, which is still being set up. Type approval for a "jet engine motor glider" would therefore also fall within the competency of the EASA. The only aircraft EASA is not responsible for, are the so-called "Annex II" aircraft (which, according to EU Regulation 1592, come under the jurisdiction of the national aviation authorities). That is why efforts in the area of "jet engine motor gliders" are concentrated on national levels and in "research and testing". To our knowledge, the EASA is not yet officially dealing with this issue.

The exact wording of the EU Regulation can be found under:

In the light of the expected developments, the German Federal Aviation Authority, the Luftfahrt-Bundesamt, has taken the initiative and contacted other European Agencies that are active in this area, in order to come up with proposals for a joint approach. We do not consider it appropriate, for instance, if jet engines for motor gliders had to comply with the same construction regulations as engines meant for commercial airliners. The same goes for manufacture and maintenance etc..

We are not aware of any applications for type approval of such an engine, or a "jet engine motor glider". Any such application would have to be submitted to the EASA. In order to be prepared for such an eventuality, we would like to be in a position where we can submit a proposal for harmonized technical regulations to the EASA, or have already applied for those. Any such proposed regulations would be adapted especially to the requirements of self-sustaining motor gliders. Whether the EASA would accept such proposals we obviously cannot tell with any certainty.

In answer to your question, this means that "Certification" is currently only possible on a national level, and only for "testing purposes".

We hope to have been of service to you with this information.
Yours sincerely,

So that is the legal situation at the moment.

And what are DG Flugzeugbau doing in this area?

Akaflieg Karlsruhe (a university gliding club) are currently working on a project for which we have supplied a jet-engine-prepared DG-1000. It has to be said, though, that the preparation is limited to the fitting of a second fuel tank with a capacity of 35 litres, resulting in an overall fuel capacity of 55 litres. Apart from that, it is a "normal" DG-1000S. The people at Akaflieg apparently have a turbine at their disposal that seems more suitable than the model aircraft turbines previously used - but it will not be exactly cheap. The turbine is expected to cost almost EURO 10, 000.

We are monitoring and supporting the Akaflieg project and will study the findings carefully. Should it result in a marketable product we will certainly approach it with an open mind.

Some weeks ago - in autumn 2005 - we had the chance to see and test fly an 18m glider with a jet propulsion system. It was a single design made by a hobby aircraft builder. After having checked the system we found out:

We are still watching this fascinating propulsion concept but in the moment the performance data do not convince us.

My name is Gert Acketoft (The guy in the backseat at the picture of the jet-propelled Blanik in your web-site).
We are a team with 17 members who take the decision to try to make a jet-propelled glider.
Our intention was not to make a SLG; it was to make an SSG and we think we are going to succeed.
The idea was to make a cheap turbo for older gliders so more glider pilots can have afford to own a SSG. We think that today there are many reasons to pilots not to try cross-country-soaring and we think a simple jet will be the solution to them.

We also have calculated that a single seater will have a speed at about 200 km/h with only one P-200 (full power).

Jet-powered glider at the night airshow