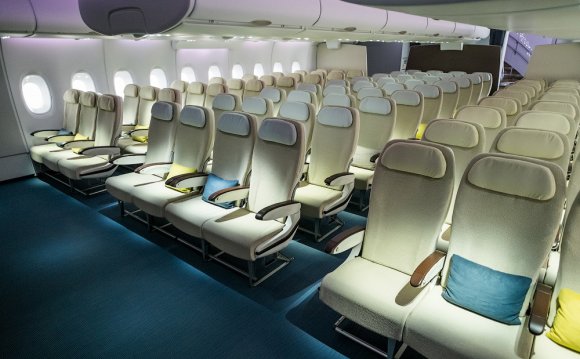 The use of mood lighting on planes has almost become cliché—ahem, Virgin—but what if airlines could take that idea a bit further, actually using LEDs and projected imagery to wholly improve the flying experience? Boeing has a pretty great idea for what a well-lit plane of the future might feel like.

A new concept video from Boeing’s product development division shows how lighting can do more than just add chiller vibes, according to Boeing’s Mike Sinnett. “Airlines could use these lighting enhancements on the walls and bulkheads to display information about the destination or to project scenes that get passengers thinking about where they’re going, ” he said. “The possibilities are endless about how this technology could be used.”

What’s remarkable is how simple many of these ideas are—they wouldn’t really require much change in the way that the planes are actually designed. Watch the video for some groovy tunes as you imagine yourself gliding over the Atlantic. I’ve collected some of my favorite features here.

There’s no reason why airlines shouldn’t be using the ceilings of their cabins like this. A simple projection can make it feel less like you’re crammed in a claustrophobic airborne tube with hundreds of germ-ridden strangers and more like like you’re slicing through the clouds on in a convertible jet. This is already a popular idea gaining traction—check out this concept for the first supersonic private jet.

In addition to seats that actually look comfortable, the use of projection technology can apply to in-flight entertainment. The entire seat-back becomes a “screen.”

Instead of a cramped closet in the rear where flight attendants must prep drinks, why not give them a snazzy bar complete with well-lit workspace and actual countertops?

Again it’s nothing terribly complicated—a giant projection TV, essentially—but what a difference this makes. It creates a glowing, welcoming hub in the center of a plane, instead of a big hunk of beige plastic. And there’s sushi!

Now if you’ll just step this way to first class...

Again, some big cushy seats that actually look comfortable. That in-seat lighting is actually pretty smart, too as it helps you too see the outlines of the seats when it’s very dark in the cabin (I assume you can turn them way down when you’re sleeping).

Personal entertainment centers in first class can use the same kind of projection technology to create more immersive viewing experiences.

Although won’t we just all just be using VR headsets when we fly?

The same ceiling projections that bring daylight to a cabin can provide more soothing nighttime light as well. Imagine seeing a real-time feed of the very same constellations one might see if the plane had a giant skylight. The night sky could slowly give way to sunrise, creating a more natural way to wake up from your red-eye, and making for a much more pleasurable arrival at your destination.