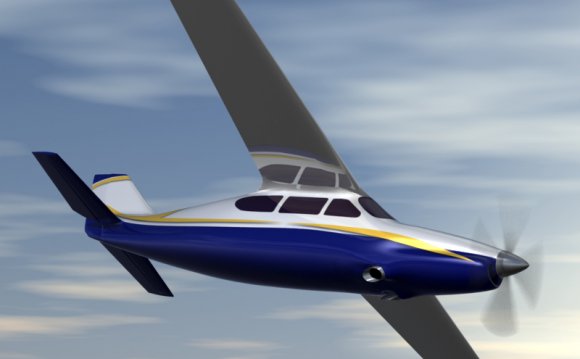 In the 1990s, Steve Schultz, CEO of Ion Aircraft (St. Paul, Minn.), was one of about 145 people who placed orders and laid down deposits for a small plane that never made it off the drawing board. Schultz and fourteen others, mostly disappointed customers like himself, decided that rather than giving up on their dream, they would design and build their own plane. The following year Ion Aircraft was born and, today, has four working employees — Schultz, a machinist, an engine specialist and a welder.

From Ion's beginning, the goal has been to build a beautiful airplane with good performance at a reasonable price. The plane would be able to comply with the rules for the U.S.

Federal Aviation Admin.'s (FAA) Light-Sport Aircraft (LSA) category, recently created to ease the qualification process both for aspiring pilots and aircraft manufacturers (see September 2005, p. 38). Additionally, it was to have tandem seating, with a raised rear seat — giving pilot and passenger an unobstructed, panoramic view — plus a rear-facing powerplant tucked between its twin boom tail, and easily removable wings. The latter permit the plane to be stored in an enclosed trailer, which saves hundreds of dollars on airport storage fees, and enables Ion to offer the plane with interchangeable wings: a longer set that make it LSA-compliant (see chart, p. 70) and/or a shorter set that adds 12 knots to the plane's speed but brings its stall speed above the LSA limit.

Ion's aircraft will ultimately be available in four models: the 100, 105, 110 and 120. The 100 is a kit aircraft that meets LSA rules, while the 105 is an experimental, non-LSA-compliant aircraft that is based on the 100 design but can be customized to suit the owner. A 105 may, for example, have an in-flight adjustable-pitch prop to allow blade angle changes during climbing vs. cruising for increased efficiency, or it may have shorter wings, or retractable landing gear, none of which are allowed under LSA rules. The 110 will be modified for the European market, and the 120 will be a ready-to-fly, factory-finished aircraft. Ion is currently building the first prototype of the 100/105, with flight-testing planned for spring and summer of 2006. The expected empty weight of the plane is a little over 700 lb/317 kg, with a gross weight of 1, 320 lb/599 kg, permitting a useful load of 600 lb/272 kg for cargo, fuel and two passengers. With a fuel tank capacity of 26 gal/98 liters, the plane's cruising distance will be 700 to 800 miles (1, 129 to 1, 290 km).

Making A Composite Plane - Laying Up The Wing p1 #4