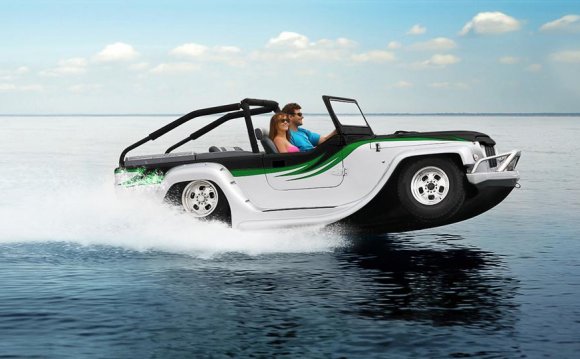 Gibbs has developed a motorbike that becomes a jet ski when it's on water, calling it Biski.

Needless to say, it looks like a love child of a jet ski and a motorbike. On top of that, the name appears to have been combined the same way. From the "ski" of "jet ski" and the "bi" from "bike, " the logical outcome is Biski, obviously.

"The Biski is truly unique; as a single seat (or single plus pillion), twin jet, HSA Motorcycle, it is a world's first in many ways. At just 2.3m long and under 1m wide, it is the smallest of all Gibbs High speed amphibious platforms, and very probably the most technically advanced. It represents true freedom for the individual; serious fun, " Gibbs says.

The company behind the amphibious motorbike consists of a group of engineers based in Nuneaton, Warwickshire in England, and the team seems to have created something that looks like it came out of a spy movie. At first glance, its appearance doesn't exactly scream wow, but going beyond that, it's one heck of a machine.

Biski sports a chassis that floats, and when it hits the water, it'll retract the two wheels to go into amphibious mode. The transition takes 5 seconds, and the time to plane takes 3 seconds.

Usability-wise, it's fitted with lights tailored for both land and water travels. With a 55 HP twin-cylinder petrol engine, the vehicle can reach up to 80 mph on land and 37 mph on water. As for the weight, it's measured at 503 pounds, where it carries a 20-liter fuel tank.

At any rate, a motorbike that turns into a jet ski and vice versa at a tap of a button defines nifty. As of right now, there's no pricing yet. Also, Gibbs hasn't given out any detail regarding the available colors, but with fingers crossed, there will be numerous options when it goes official.