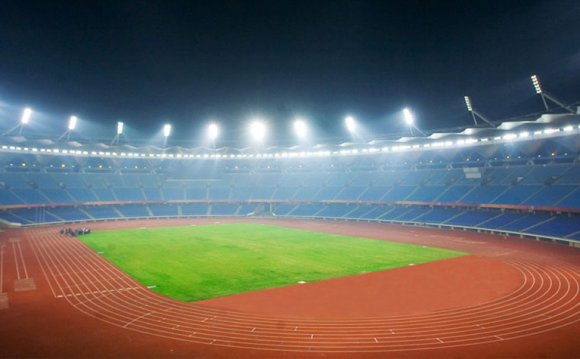 As the idiom suggests, the difference between night and day is dramatic — particularly when viewed from a literal illumination standpoint. High noon on a sunny day will introduce 8, 000 foot-candles of light to the earth. By comparison, a moonlit night — one bright enough to read a newspaper by — produces three one-hundredths of one foot-candle. Thus, turning night into something resembling day for sports participants, fans and live television audiences is not a task to be taken lightly.

How sports lighting manufacturers go about it varies, but the arc of the industry appears as predictable as the earth's daily rotation around the sun. According to some industry experts, rapidly advancing LED technology will render obsolete the high-intensity-discharge (HID) metal halide lamp — the sports lighting staple that hasn't changed significantly in decades — perhaps within the next several years. Few deny LED technology's bright future based on its reliability, versatility and energy efficiency, but its comparatively high capital investment costs have thus far kept it in the outdoor market's shadows.

"In 2014, LED equipment in an average application might cost 50 percent more than HID, " says Musco Lighting CEO Joe Crookham, whose company's metal halide lighting solutions currently illuminate seven Major League Baseball parks and countless outdoor sports venues worldwide. "My guess is that somewhere in the three-to-five-year range, LED equipment will get to the place where it does not cost a premium over HID, in which case there will be no reason to buy HID. If you can buy LED for the same or less and gain all the benefits of the LED, it will replace HID completely. We're crossing a watershed point."

OUTSIDER TRADING
Obsolescence is likely to come even quicker for HID metal halide lamps in the indoor arena, where Musco and others already boast LED installations. One reason: The energy efficiency of LEDs is magnified in buildings that are used perhaps 4, 000 hours out of the year versus the 400 hours of use a stadium might see. Stadium operators may be reluctant to make the capital investment if the ROI isn't realized short term. "On a high school football field that runs 50 or 70 hours a year, we don't get a lot of discussion from people about the energy savings, because they just don't use enough energy, " Crookham says. "But the superintendent in the high school system cares about what it costs to run the lights in the gymnasium."

On the manufacturer's side, there are plenty of factors to consider when taking LED technology outdoors, not least among them weather — high winds, rain, freezing temperatures — and distance. A fixture in the arena setting might be required to throw light 125 feet to the playing surface, whereas an outdoor stadium might dictate throw distances five times as long. "You need to light up second base on a baseball field, " says Joe Casper, chief technology officer at Ephesus Lighting Inc., which is currently in negotiations with three NFL teams to convert their stadium lighting to LED. "On the backside of some of these NFL stadiums, you're up about 200 feet, and now you're throwing light down 600, 700 feet to hit the 50-yard line."

While a metal halide fixture relies on sophisticated reflectors to focus and project light emitting from the bulb's four-inch-long arc tube, an Ephesus LED fixture concentrates light from a proprietary number of comparatively tiny LEDs clustered behind 144 point sources arranged in quadrants across a 20-inch diameter lens. Years in development, the lens consists of polycarbonate materials specially designed to focus the light, as well as a hydrophobic component that repels water and dirt. No reflectors are required. "We're producing nearly three times as much light as we do with our indoor fixture, " Casper says. "We then need to take the light we have generated and focus it very precisely."

So precise is the light cutoff in LED fixtures that visors employed by traditional stadium lighting to guard neighborhoods below and the dark skies above from light pollution aren't needed, either (though the Ephesus fixture design includes a visor solely because end users expect to see one). "It's almost razor-sharp definition of light to the playing field, " Casper says. "We light the playing field and keep it dark in the seats."

Adds Crookham, comparing the BB-sized point source of one LED favorably to that of a metal halide lamp, "It allows you to be more efficient, because you spill less, waste less, and you don't have to bounce light two or three different times in a fixture to be able to get control of it like you do if you have a long arc tube."