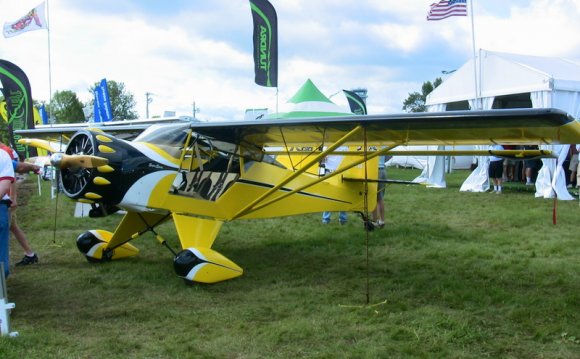 Dan Denney of Denney Aerocraft designed several small homebuilt aircraft, many of which are operated in the bush. Most are conventional gear and some may be fitted with floats. The Kitfox featured folding wings and was easily trailered, allowing owners to share hangar space or keep their Kitfox's at home in a single car garage.

Dan Denney sold his interest in these kitplanes in 1992 to SkyStar Aircraft Corporation. SkyStar built the Series 5, which offered both a taildragger (the Outback/Safari) and a tri-gear (the Vixen/Voyager) configuration. This airplane evolved into the Series 6 and Series 7 until SkyStar filed bankruptcy in 2005 and ceased operations.

John and Debra McBean incorporated Kitfox Aircraft in 2006 and acquired the assets of SkyStar. John wrote in to advise us that Kitfox production is up and running and stronger than ever.

Many of the Kitfox kits were star performers for the bush and, somewhat practical alternatives to the and . These planes were, for lack of a better analytical framework, Super Cub or Husky "lites." They were not nearly as capable as the Cub or Husky, but if a two-person plane for recreational excursions into the bush is needed, these planes should not be overlooked. Just don't anticipate being able to haul good amount of equipment or gear in a Kitfox.

The kits offered by the various companies were relatively complete and were in the abilities of the average handyperson in terms of construction. If one sought to construct one of these planes from plans only, the construction would be as daunting as building a "plans-only" Cub as the construction methods for both airplanes were somewhat similar. Latter models of the Kitfox were larger and more capable.

Kitfox Aircraft claims the Kitfox has been produced for over 28 years and over 5, 000 kits have been sold worldwide. They currently offers these kits in several different models. Their Classic IV is the most copied kitbuild on the market and is available by special order only.

The 1232 lbs max limit was based on the European rules and proposed changes. When the actual rule was published, the maximum gross weight was increase to 1320 lbs for gear equipped aircraft and 1430 lbs for those on floats. This allowed the Series 7 Super Sport Aircraft to fit into the Light Sport Aircraft rule and have a lot of margin for safety built in.

The Series 7 Super Sport was originally designed and tested to maximum gross weight capabilities of 1550 lbs max gross at +5.7 G's and -3.8 G's ultimate loads. Because of the Kitfox's light empty weight it allows the Super Sport to be operated at the lower 1320 lbs or 1430 lbs and still carry up to 150 lbs of baggage and 2 adults.

The top of the line S7 Super Sport, nicknamed a Jeep with Wings, has a load of up to 800 pounds, 27 gallon fuel capacity, 150 pound cargo capacity and STOL performance. It has a wide cockpit, folding wings, and is able to convert from tailwheel to nose wheel in a matter of hours.

The S7 kit shares no common primary structure to the previous kits. It can be equipped with Rotax turbo power, Continental, Lycoming and even the Rotec 7 Cylinder Radial engines.

When equipped with an aspirated engine and certified to the maximum gross weight authorized by the Light Sport (LSA) regulations, a Sport Pilot may operate the Kitfox Series 7 with no FAA medical certificate required.

The Series 7 Super Sport was originally designed and tested to maximum gross weight capabilities of 1550 lbs max gross at +5.7 G's and -3.8 G's ultimate loads. With the Kitfox's light empty weight it allows the Super Sport to be operated at the lower 1320 lbs or 1430 lbs and still carry up to 150 lbs of baggage and 2 adults.

Watch the video below to see a Kitfox on skis in a deep snow.

After this Kitfox page was posted (at the request of the readers) we received an email from John McBean who manufactures the kitfox. I've pasted the email into this page for everyone to read:

Please update the Kitfox section.. is our web, we are stonger then ever and production continues on the aircraft. Any questions please feel free to contact me at 208.337.5111 or drop an email. John