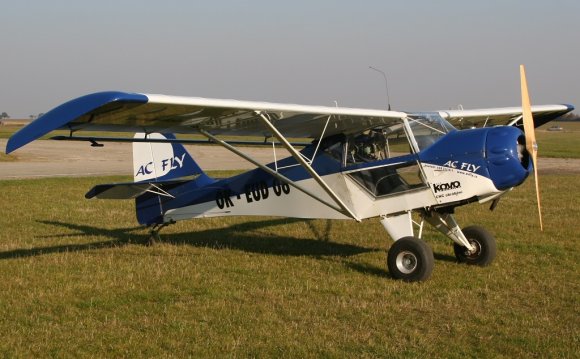 With the Lycoming O-233 on the nose, the Kitfox Series 7 Super Sport takes on a pert, compact appearance. Although Kitfox Aircraft had the older Lycoming O-235 as an optional engine for this airframe, making the 233 an ideal fit took a decent amount of work.

McBean approached Lycoming to be one of the early adopters of the 233 after the engine was introduced at Oshkosh. "I liked what I saw of the 233, " he says, "and I'm always willing to try new things. Plus, I was eager to have an American-made engine." He's quick to praise the Rotax for its low weight and overall good reliability record, but you also catch a glint of a red, white and blue undershirt beneath his Cabela's flannel.

This would be a new relationship for Lycoming and Kitfox under the current ownership, but the airplane and the engine go way back. In the time of the Kitfox's rapid ascendancy, SkyStar Aircraft, which had purchased the company and the designs from Dan Denney, looked to expand the airplane's appeal. That desire resulted in the Kitfox Series 5, a significantly larger, beefier and more "grown up" Kitfox than the ones that started on two-stroke powerplants and a waif-like structure. The Series 5 was designed for the then-new Rotax four-strokes, sure, but it was also meant to take the small four-cylinder Continental and Lycoming engines. Many were built with the Continental O-200 and the Lycoming O-235, the latter an engine that could be readily found in the remainders bin.

The propeller shown here, a first-test example from WhirlWind originally intended for the Continental O-200, has been replaced with a Catto prop with greater diameter. Kitfox is still testing to find the best prop for this airplane.

Originally, McBean wanted to move the engine aft 2 inches, but settled on 1.5 inches as the best compromise of weight placement and firewall access. Shifting an engine is not a trivial process. McBean had to create an all-new engine mount, have an entirely new exhaust system crafted (it's a conventional double-crossover system with shrouds for cabin and carburetor heat), rework the carburetor mounting system and airbox, and accommodate a lightweight starter and alternator. Oh, yes, plus do an entirely new set of rigid baffles. That, and create a new firewall-forward wiring harness and find room for the ignition coils on the cool side of the baffling. Trivial stuff, really.

The reclining seats are comfortable, while the ample baggage area behind can hold 150 pounds structurally.

In the climb we saw 500 fpm at 85 to 95 mph indicated. At closer to the best-rate speed of 65 mph, our climb rate increased to 750 fpm. Notice that these figures are lower than what the Rotax posts, according to Kitfox's data. We'd soon have a partial explanation. McBean and I leveled off at 4000 feet MSL (at our temperature that was 5600 feet density altitude), brought the throttle back until we saw 2800 rpm, then leaned to peak the rpm, which is theoretically the best-power mixture. By averaging two GPS-derived groundspeeds, one upwind and the other downwind, we witnessed a 125-mph true airspeed under these conditions. Pulling back to 2600 rpm reduced our TAS to 118 mph. It's worth noting that Kitfox claims 120 mph TAS nominally for the 100-hp version. That small prop helped high-speed cruise a bit at the expense of climb performance, the classic set of compromises laid bare.

Specifications are manufacturer's estimates and are based on the configuration of the demonstrator aircraft. * Kitfox Aircraft has not completed full testing for the O-233 package and has not set final pricing for the specific kit components. The listed price is for the similar O-235 installation package, less engine. ** These performance figures are for the 100-hp Rotax version of the Super Sport.