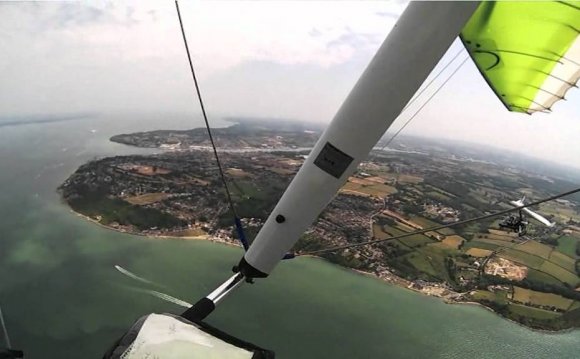 That cat was higher than a kite!

Romain Jantot posted the video to YouTube that shows a pilot and his female passenger take off in and get an interesting surprise as the cat — perhaps feeling lonely on the aircraft's wing — crawl over to join them.

In the video, the feline is in plain view but it takes the pilot a good 20 seconds before he spots the cat peering over his passenger's shoulder and quickly but calmly turning the plane around and bringing it in for a landing.

The flyer, perhaps inspired by his brave pet, also seems pretty relaxed even though he is piloting a machine hundreds of feet in the air with an unsecured cat hanging onto only a metal beam.

His passenger seems very amused by the whole event and after they land she cracks up as the pilot tries to safely remove the animal. But this cat is too much of a daredevil to need assistance and hops off on her own.

An online video shows a pilot and his passenger were not the only ones on board this single engine flight.

After discovering their furry stowaway the pilot landed the aircraft. The cat is doing well.

The group specializes in flying ultralight aviation, also known as micro flying, which consists of more affordable one- or two-seat fixed-wing aircrafts.

Ultralight aircraft, 12 ultralights that give a lot of ...