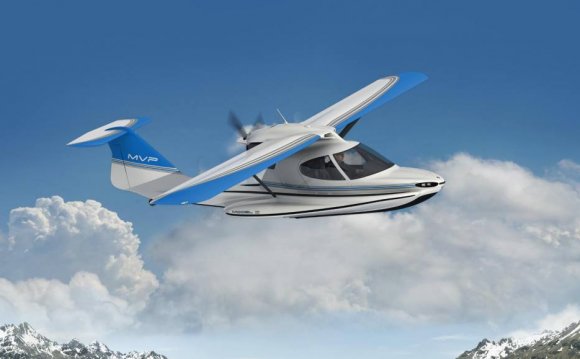 TAVARES — The two-seater plane taxied out of its warehouse toward Lake Idamere, driving down a ramp right into the water. Its wheels retracted, leaving only its boat hull of a bottom.

The SeaRey circled the lake before speeding up and taking off over the water, cruising by a couple of men in a fishing boat.

"We believe a lot more people will want to fly this, " said Adam Yang, CEO of Progressive Aerodyne, the company that manufactures the amphibious aircraft. "It is a fun plane to fly."

It's also the first in the country to win federal approval as "light sport aircraft, " a new category of planes designed to be easy to use and fly. This model is an upgrade from earlier SeaReys, sold for 20 years as experimental kits that pilots had to build themselves. The Federal Aviation Administration approved the plane for full-scale manufacture, a milestone that will bring jobs to the area and take Tavares' standing as "America's Seaplane City" to the next level beyond tourism and recreation.

"You can't be Motown unless you're making music, so it is very important that we make seaplanes here, " City Administrator John Drury said.

Taking advantage of its location on Lake Dora, the Lake County city re-branded itself to focus on seaplanes. The city of nearly 14, 000 established a seaplane base in 2010 that has since logged more than 3, 400 landings and has revitalized its downtown area. Several new restaurants, a new boutique hotel and more businesses have opened.

Now Progressive Aerodyne's manufacturing facility will further bolster the city's seaplane focus. The company plans to hire employees and ramp up production, with a target of building and selling 30 to 40 planes next year. Capable of landing on water, grassy fields, sand or swamps, the SeaReys will be priced at less than $140, 000.

Two other aviation companies will be coming to Central Florida next years. ItalicoAviationUSA, an Italian aviation company, will open a plant in Kissimmee for its two-seater propeller planes, also qualifying as light sport aircraft. Wipaire Inc., a Minnesota company that specializes in installing "floats" that enable conventional planes to land on the water, will open a service center in Leesburg.

Amphibious aircraft have existed since the early days of aviation and flourished in the era before World War II, when pilots needed the flexibility to land on water or on land because there were fewer runways, said Chuck Eastlake, an aircraft-design expert and professor emeritus of Embry-Riddle Aeronautical University in Daytona Beach.

After World War II, amphibious planes became more of a niche, though they remain vital in places such as Alaska, Eastlake said.

However, there's a growing market for smaller aircraft, said Randy Juen, CEO of seaplanemarket.com, an online listing service for new and used seaplanes.

The lighter aircraft not only cost less, compared with $400, 000 for other entry-level aircraft, but can use cheaper fuel and the insurance premiums are lower, Juen said. A person interested in getting a pilot's license could more easily get a sport license to fly the lighter craft, which need fewer flying hours and therefore less money for training.

"Small aircraft is where the biggest growth opportunity is, " Juen said. "There is also an international market for these planes in China, India and developing countries."

"Because it's fully amphibious, it can be very versatile, " Richter said. "You can land on 98 percent of the water bodies in Florida. You can land it in remote areas.

"We've had customers who take the planes to the mountains in Canada and Alaska or island-hopping in the Bahamas, " he said.

For 20 years, it had been a family-run business that made experimental kits of its amphibious aircraft for pilots to build themselves. The company had hit a plateau in its potential growth because of limitations in selling experimental-plane kits. Around that same time, Tavares officials looked for a seaplane manufacturer to relocate to the city and worked hard to help the company relocate.

As production of the SeaReys expands, Drury hopes it will attract other businesses to Tavares, from parts suppliers to paint and aircraft customizers.

"Over the next three to five years, we should see a seaplane cottage industry from all the ancillary business related to building a seaplane, " Drury said.