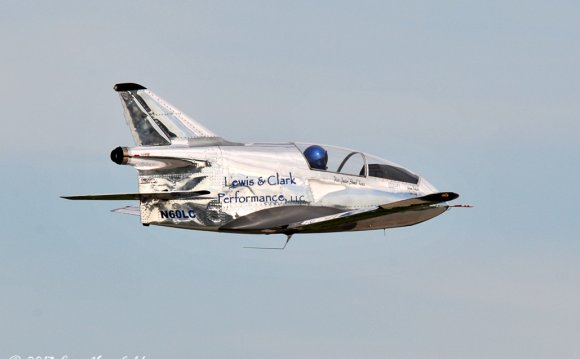 OKLAHOMA CITY - It's dubbed the "World's Smallest Jet" and one of Oklahoma's Own is flying it.

The airplane's design was originally developed in the 1970's, but a new and improved version is slowly making a comeback.

The small plane was originally called the BD-5, a build it yourself airplane that was also featured in airshows. It was designed by Jim Bede of Bede Aircraft, Inc. However, BD Micro Technologies, Inc. has worked for the past 20 years to update the BD-5 with today's technology. Oklahoma pilot Justin Lewis has helped the company. The result is the FLS Microjet.

"It's just an upgraded BD-5, " said Justin Lewis, pilot of one of the FLS Micro Jets. "We've had a lot of structural improvements, a lot of systems improvements, we have a glass cockpit and we have an engine with a brain on it."

Lewis said in its heyday, the small jet was one of the most famous airshows of all time. Even James Bond flew the jet in the 1980's movie "Octopussy."

"He flew it through a hangar to dodge a missile, " Lewis said. "That actually has pretty strong ties to Oklahoma because that scene was filmed in the Oklahoma City area at Page Airport. The hangar still exists out there today."

And so does the jet. Lewis says he has one of only four of the FLS Microjets in flight right now around the world. Last year, he started taking his jet on airshows.

"When that jet comes out there, all is has to do is show up, " Lewis said. "It's so small, so unique that people are just amazed to see that this thing exists. The next thing they want to see is if it actually flies."

Weighing only 416 pounds before adding fuel and the pilot the FLS Microjet can fly. In fact, Lewis says the jet can reach up to 320 miles per hour.

"I think the most popular thing I do is nothing aerobatic, not even the high speed pass, when I go down the runway, " he said. "It has the world's fastest landing gear, which extends and retracts in less than half a second."

Lewis will have to put his airshows on hold though. He says his unit, the 188th Fighter Wing with the Arkansas Air National Guard, is heading out soon for a three-month tour in Afghanistan.

"Our main job is to take the guys on the ground and give them the confidence that someone is watching them from overhead, " Lewis said.

A confidence he too has gained from his years in the military.

"The military background definitely gives me the confidence and the skill and experience to fly this jet aircraft, " he said.